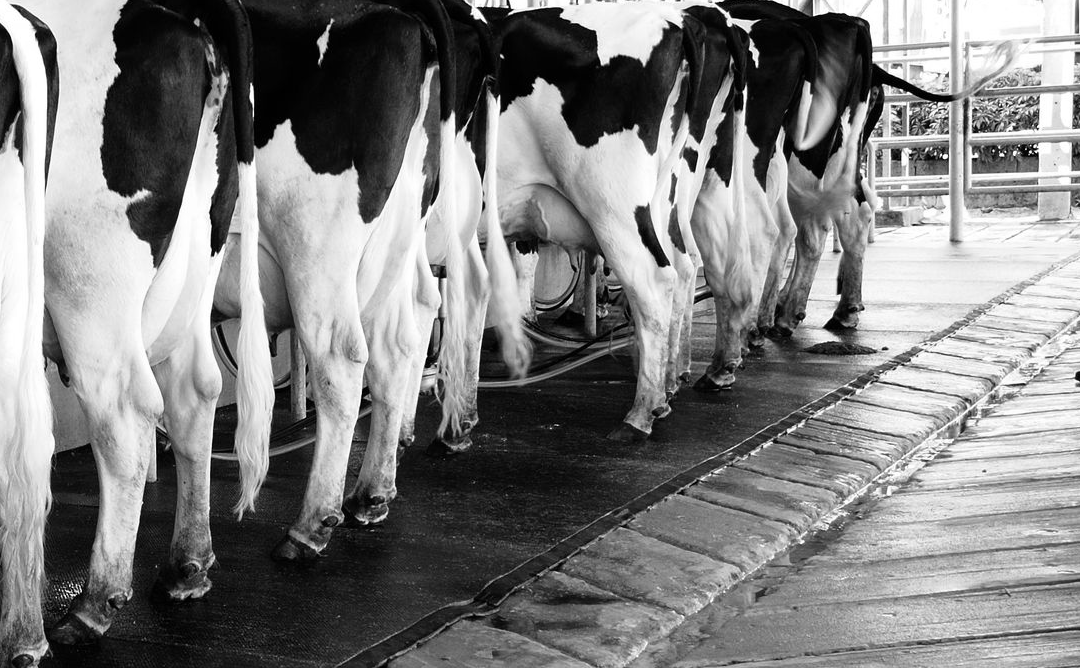 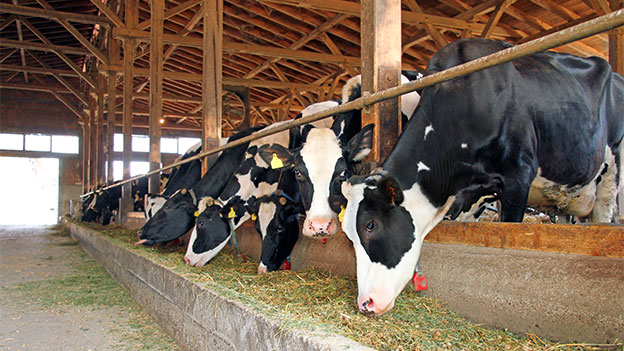 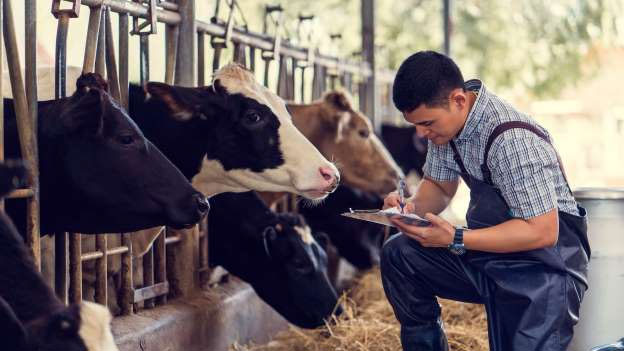 The nitrogen metabolism in dairy cows:
(by M. Wattiaux – Babcock Institute for International Dairy Research and Development University of Wisconsin – 2014) 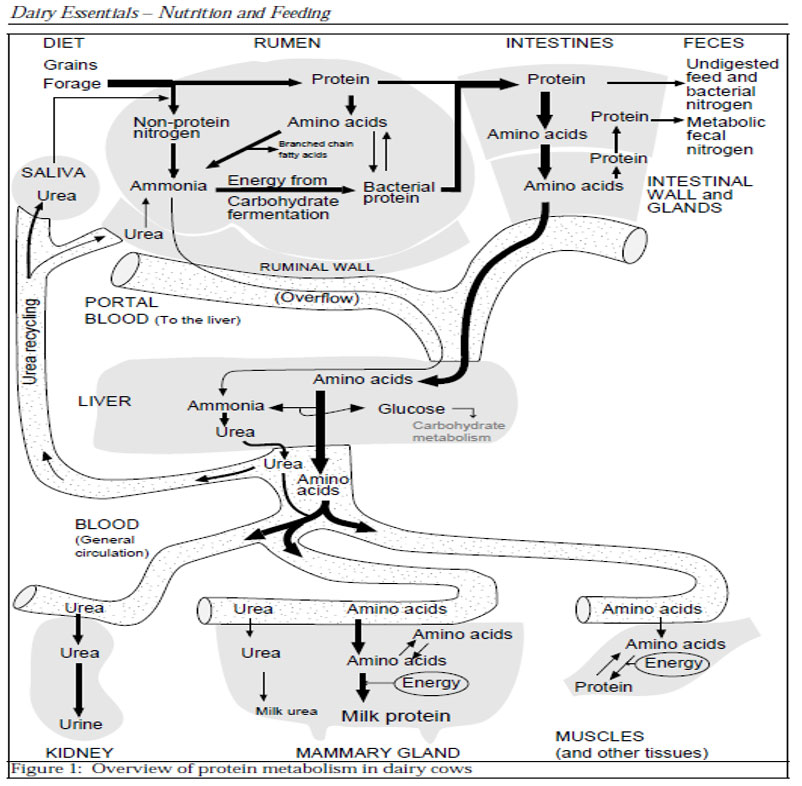 The nitrogen metabolism in dairy cows:

The ruminal pH change caused by a sudden and / or sharp increase in rumen soluble nitrogen (protein imbalance), resulting in:

Effects on animal health and production:

This situation at rumen level creates the ideal conditions for the development of the Allisonella histaminiformans, a ubiquitous microorganism of the rumen producing histamine that results in: 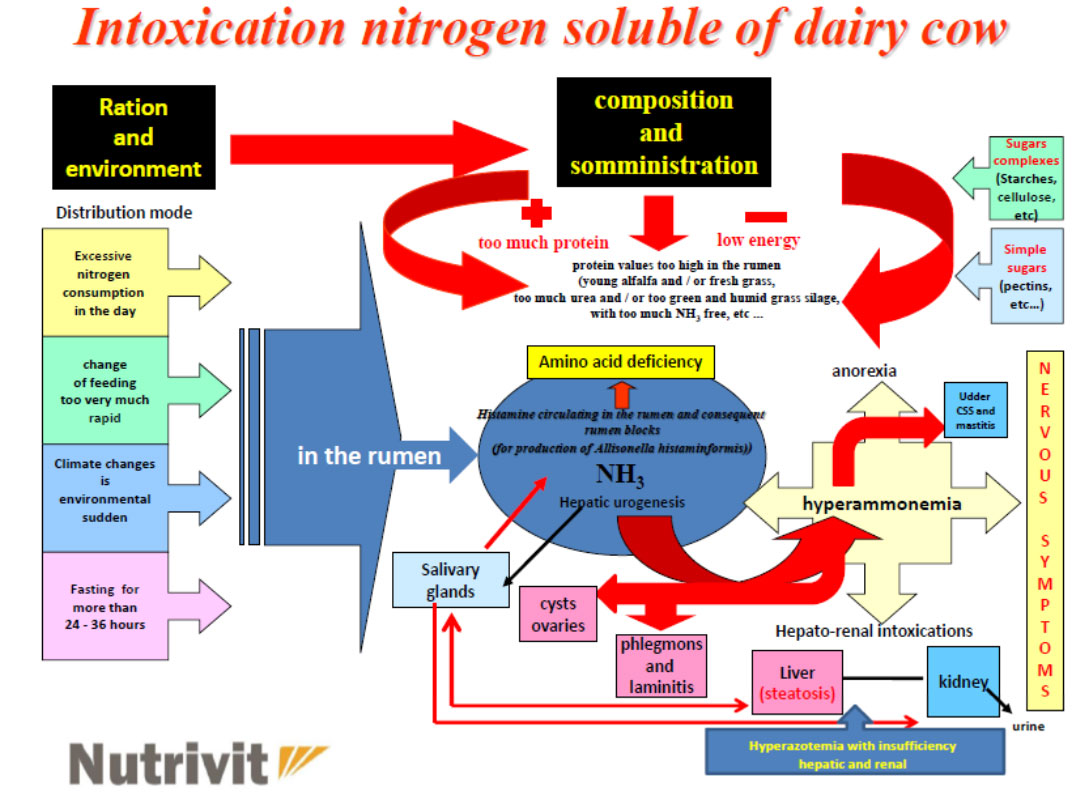 Actions to be taken on the ration for the subacute forms to improve the health, reproduction and production of cows: 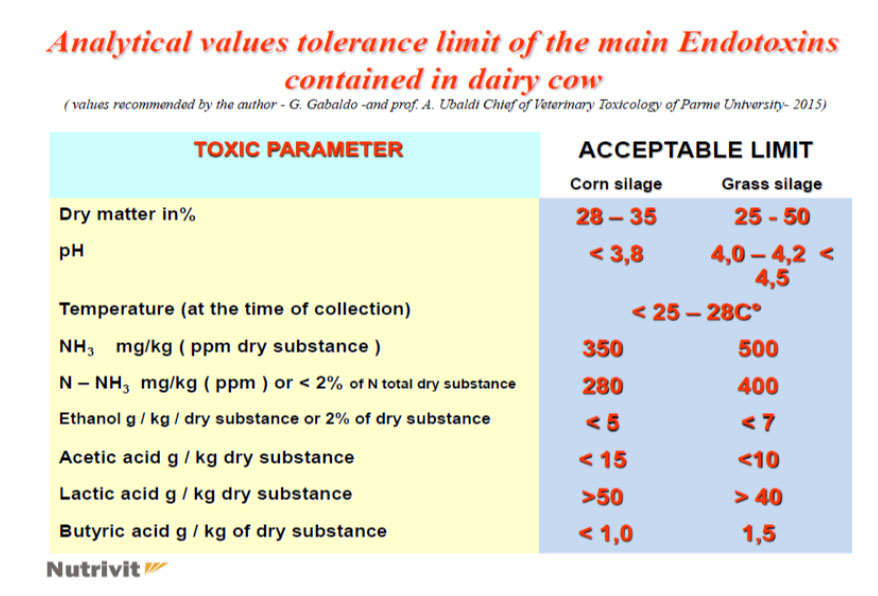 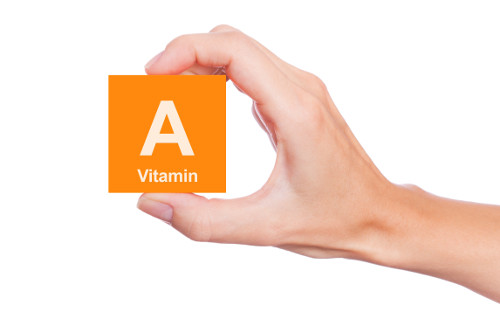 Natural sources of Vitamin A
Fish liver oil (halibut, cod, salmon, etc.) has always been considered, universally by all researchers, scientists, doctors and nutritionists, as the best existing source of natural Vitamin A . One of the richest fish of theis vitamin, which lives in the North Pacific (Alaska) within the Arctic circle is the Halibut belonging to the Hippoglossus hippoglossus varieties.

How is processed?
After extraction, the oil is processed to obtain different types, more or less purified and concentrated, destined respectively for the pharmaceutical, cosmetic and zootechnical industries. The quality of the oil depends not only on Retinol or Vitamin A but also on the degree and technique of refining, the degree of rancidity, the degree of purity and its pollution and contamination index, both bacterial and of inorganic residues, with particular reference to heavy metals (mercury, lead, cadmium, etc …), and to hydrocarbons (oil and derivatives). Therefore, it requires careful processing by suitably equipped industries and able to guarantee excellent quality that is constant over time at acceptable prices. 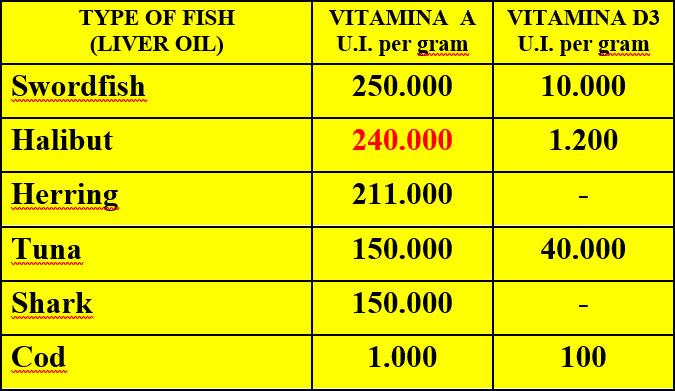 Natural Vitamin A or Retinol, naturally contained in this type of oil, although apparently similar to that produced synthetically by the chemical industry, is profoundly different and to and say affirm , as many technicians do in the zootechnical field, that Vitamin A obtained by chemical synthesis it has the same biological value as the natural one (ie biologically active), it is an obvious gross error. They are two distinct products that have nothing in common but the denomination, in fact they have one:

It was the prof. McCollum in 1926 at the Experimental Agricultural Station in Madison (Wisconsin – USA) who pointed out that the vital factor contained in the fish liver oil of the “Arctic” (improved spermatogenesis in boars)seas was a fat-soluble substance (chemically belonging to the amine group) and since then it was assumed that vital factors of this kind contained in food were more than one, they called it seen Vitamin A, since it was the first. Later the same researchers discovered that the grass of some pigmented plants such as alfalf and carrots and many other plants, had similar properties. Thus they came to the conclusion that even in the plant world there was a vital food factor of this type, this time water soluble. Only later, with the evolution of biochemical studies, was it possible to state with certainty the existence of two sources of this vitamin.
The first is a real vitamin called Retinol of exclusive animal origin and the second a provitamin called water-soluble β-Carotene of exclusive vegetable origin, which once taken by the animal is transformed into Retinol or Vitamin A in intestinal cells: 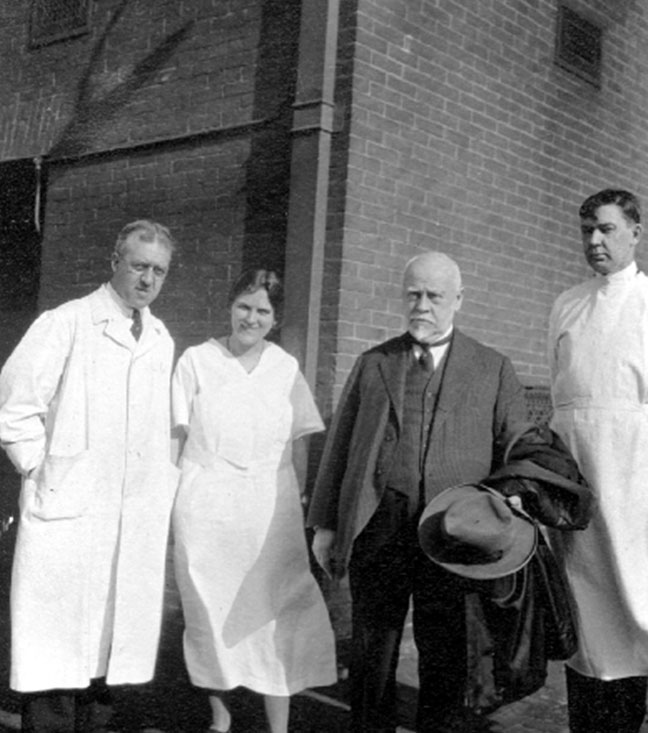 Biochemical differences between Natural Retinol and synthetic Vitamin A
The naturally occurring Retinol is in two chemically similar but not identical forms called A1 and present at 95% in marine fish oil and A2 or 3-dehydroretinol present in the same 5% oil. The form A1 which is the only synthetically reproduced. Retinol occurs naturally in two forms called “vitamers”
1) Retinal ‘all trans’
2) Retinal ‘11 cis ’
The form A2 or 3-dehydroretinol is not reproducible and is distinguished by the presence between the C3 and C4 of a double bond = unsaturated. Vitamer A1 is undoubtedly the most functional, while Vitamer A2 is not exactly known for its function other than acting as a synergist of A1 and cannot be reproduced synthetically.
This partly explains why dosages of natural Vitamin A or Retinol, all in all quite modest, have given physiological responses much higher than those normally obtained at high dosages with synthetic ones and why the latter is not at all toxic. 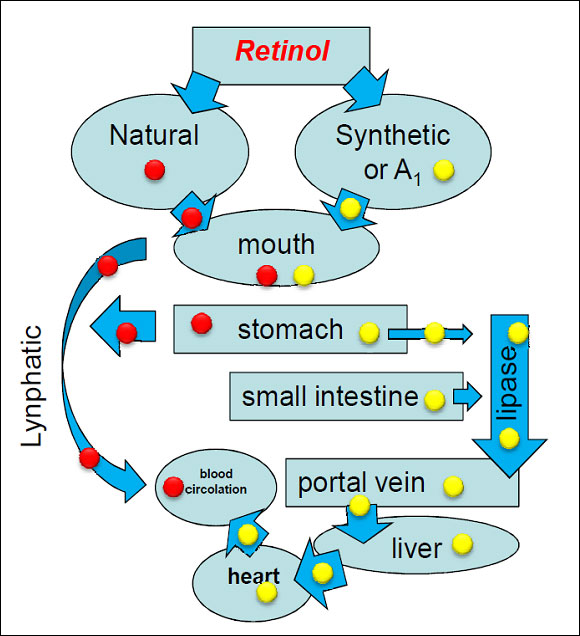 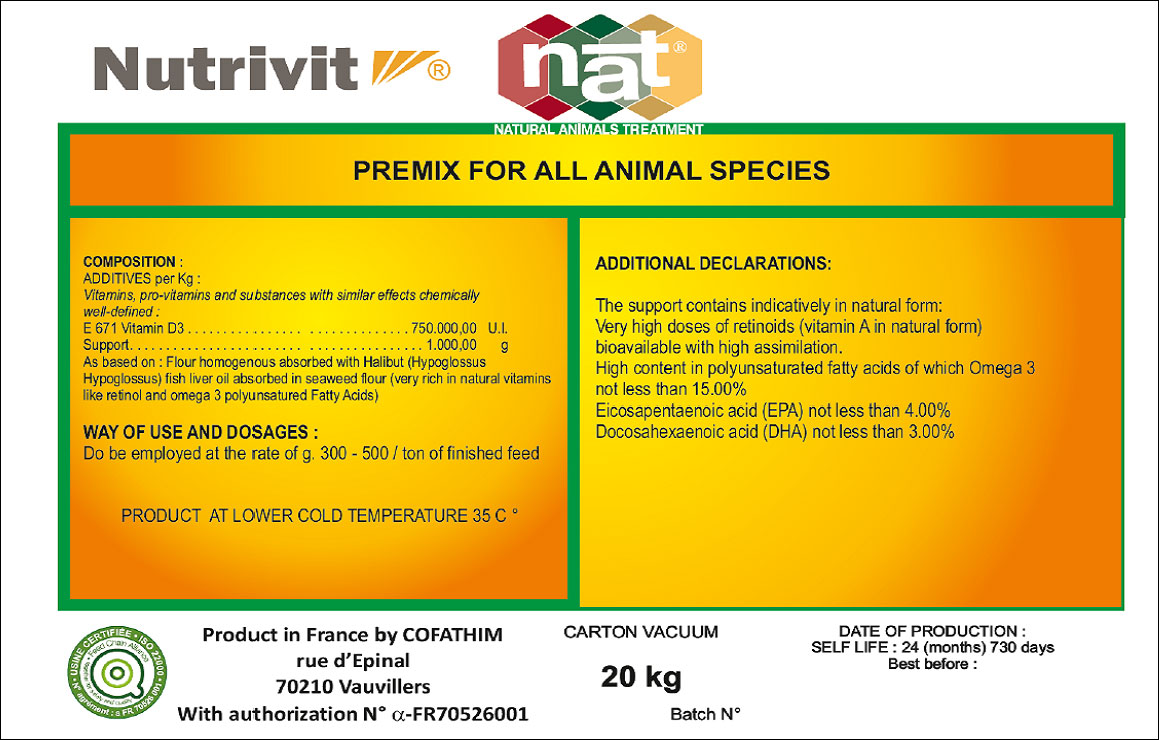 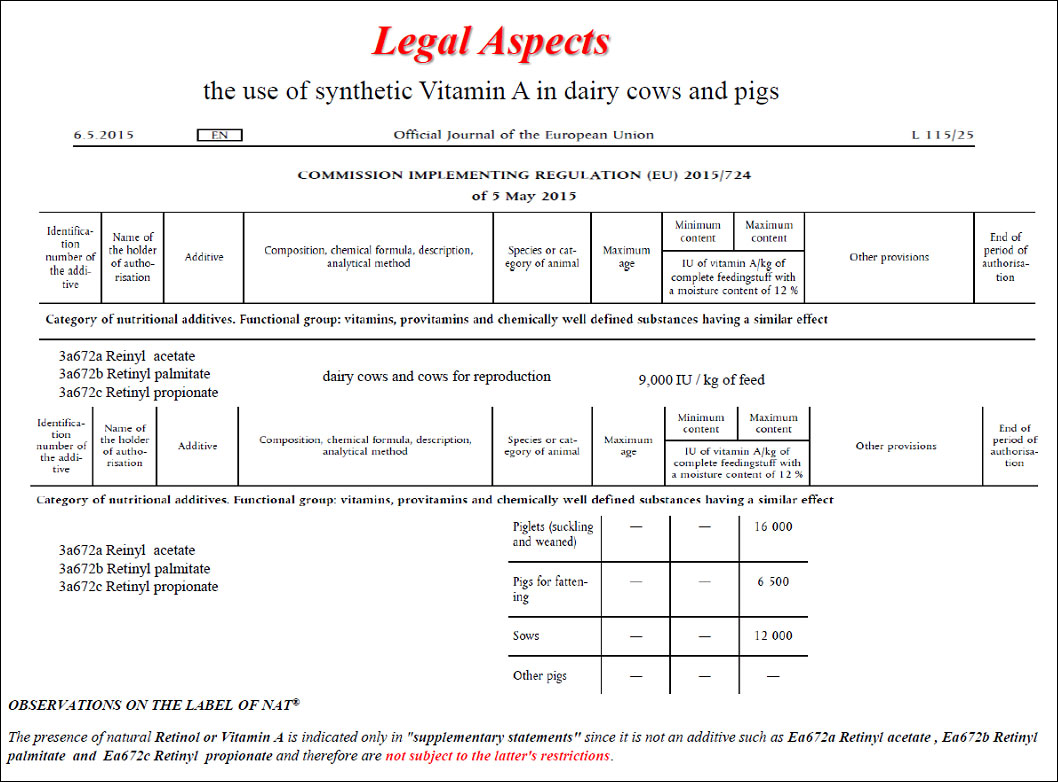 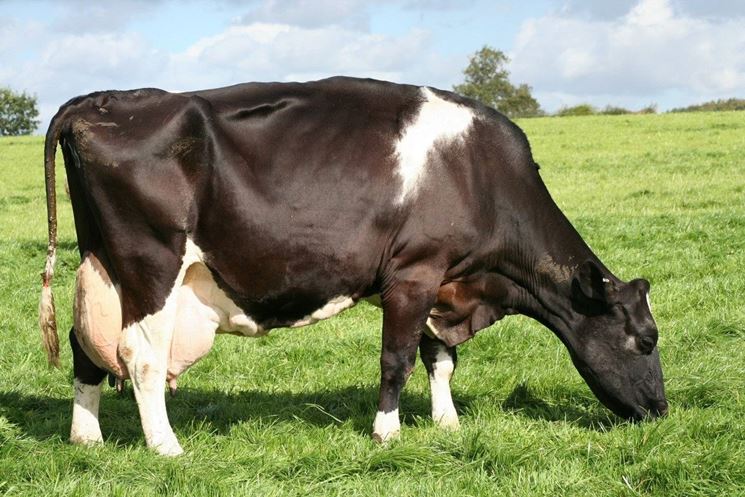 Polyunsatured Fatty Acid or PUFAs must be introduced compulsorily with the diet. (So called Essential Fatty Acids). Numerosus articles have shown that introducing Omega 6 or Omega 3 in the diet of dairy cows, mainly in risk period as « Transition Period », Improve both reproductive and immune status of dairy cows No trials were performed with an association of those family of PUFAs, neither with a stimulation of Rumen’s flora.

THE DHA IN THE RUMEN

It was found in vitro and in vivo that DHA-enriched micro algae have an inhibitory effect on rumen biohydrogenation of polyunsaturated fatty acids resulting in the accumulation of several hydrogenation intermediates such as conjugated linoleic acid (CLA c9t11), well known for its anticarcinogenic and antiartherogenic effects, and vaccenic acid (C18:1 t11), the precursor of CLA in the mammary gland. Recently Belgian and Dutch researchers (Boeckaert – Vlaeminck and coll – 2007) have demonstrated the accumulation of biohydrogenation intermediates was associated with the disappearance of some rumen ciliates.

LeVif ® : STEMMED FROM A NATURAL TECHNOLOGIC INDUSTRIAL PROCESS, WHICH ENHANCE THE VALUE OF THE GRAIN BY GERMINATION AND LACTIC FERMENTATION

More DHA  available in the metabolism 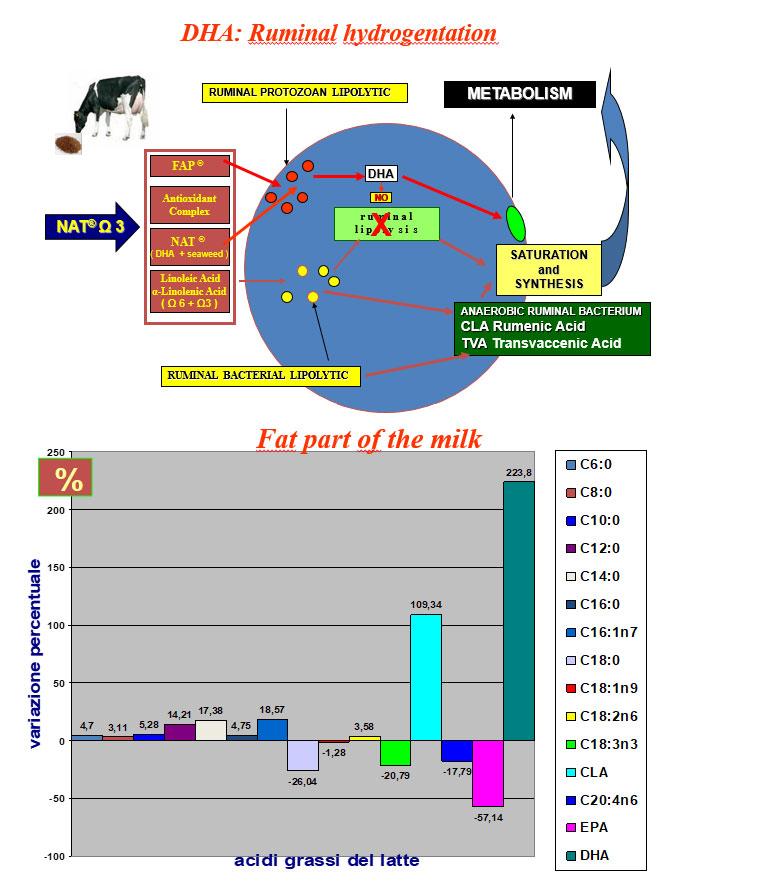 A) Study animals
The study took place in five barns of High Productive Dairy Cows (1 in VERONE and 4 in BARI – Italie lt 30/day )
– In VERONE, 20 cows were randomised in 2 groups. The treatment group receive 700g of NAT®Ω3/animal/day during 41 days. It was easy to separate the milk product from each group. However the average day of milk of the treated group was less than 30 days compared to the average day of milk from the control group
-In BARI, the 4 barns were in the same breeding methods. In each farm, 3 control and 3 treated cows were chosen at the same physiological status. The treated group received 700 of NAT®Ω3/animal/day  from 21 days before and 21 days after calving. At the end of the study only 18 cows were kept because of different events not linked to the trial. 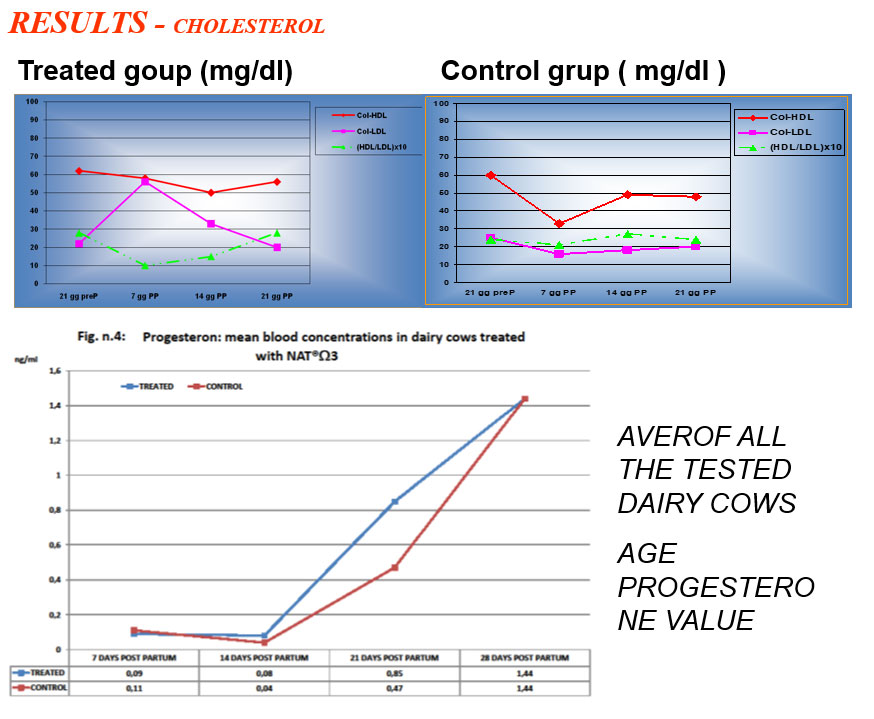 1)  NAT®Ω3, in transition period, improve:
a) Cholesterol metabolism
b) Level of progesterone and fertility results
c) Quality of the fat part of the milk 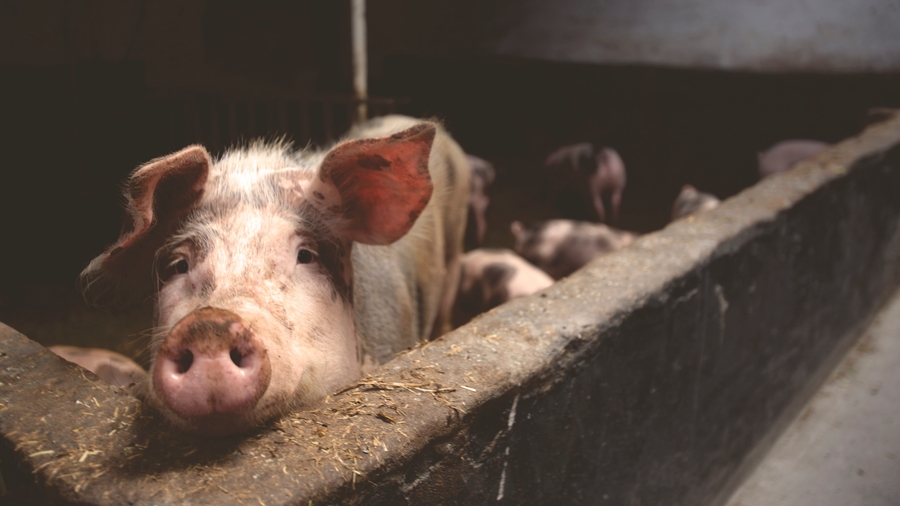 “…… The best employment opportunities in vitamins and trace elements in natural animal feed coming from the sea by oil, fish liver oil and seaweed . ” He used to say one of the most distinguished experts in animal nutrition of our days prof. Roger Wolter , research scientist and former Professor of Animal Nutrition at the École National Veterinary Alfor of Parisian University , and author of numerous books and publications on the subject. And that’s just the way it is worded NAT ® whose nutritional sources of marine origin are made in natural form. The NAT ® , in fact , is a complex nutritional concentrate based on fish oil (derived from the livers of halibut or Hyppoglossus Hyppoglossus ) adsorbed on marine algae naturally rich in Ω3 fatty acids ( eicosapentaenoic acid or EPA and docosahexaenoic acid or DHA) , Retinol (Vitamin A ) and Cholecalciferol (Vitamin D3 ) naural origin presented in the form of mini – granular ( cold granulation )

The study and the studies carried out have confirmed what we already knew in theory, that is, that the different chemical composition of the structural Natural Retinol ( against the synthetic formula that is different in structure, different atomic weights and different melting point ) will a different ” way of assimilation .” Natural Retinol , itself already emulsified , it is absorbed through the lymphatic and blood coming directly into it is immediately available in the ” metabolic circuit ” . Being the NAT ® , consisting of Vitamins ( contained in the oil Halibut ) and fatty acids (exclusively of natural origin contained in the ” pool” of algae) , is able to affect the levels of lipoproteins in the blood and the cholesterol level , precursor of progesterone. And ‘ finally emerged a correlation between the values of serological LDL and progesterone levels confirmed by an increase of at least 20 % of the levels of fertility in farms where it was tested . It is presumed that this value could be , in the future , used as a parameter to indicate the need to administer or not these nutrients. This is demonstrated by the data obtained in the various field tests carried out in the last two years, since Veterinarian Specialists in pig farms in different , totally separated from each other both in Italy and Spain . The NAT ® was administered in feed for sows kg at a dose of 0.5 to 1.0 / ton for the whole lactation except in two cases in which it was placed in a “reward” of g . 200-300 head / day administered to a nursing scofe week before weaning and continuing to the appearance of ‘ inspiration . In all cases the results obtained were truly extraordinary , of great interest and high profitability.

You have performed a series of field trials in Italy and in Spain in scrofaie of medium to large size with average size of 850 sows present in a total of nine farms and these 9 companies representing a total population of 5400 sows. The prevailing type of protocol has been to treat certain delivery rooms (20 to 30%) and use the salt part NOT treated as the control group. 2 companies have treated all the delivery rooms proceeding with the evaluation of the results by comparison of the time series. As regards the treatment of the sows, the treatment time was the lactation period (21 to 28 days). A particularly long test was performed in Spain, using the product in the feed from lactation, at a dose of 500 g / t for a full year (05/2012 → 05/2013) and comparing the data with the livestock ‘previous year (03 / 2011 → 04/2012).

The results obtained were measured by analyzing the following zootechnical parameters:

The average value of increased weaning weight was 0.9 kg with a minimum of 0.6 and a maximum of 1.2 , with an average weight of the piglets in the control and 7.11 kg of the treated group of 8 kg .

Concerning the tests performed , in addition to ‘ zootechnical results analysis , was performed an economic evaluation therefore an enhancement of zootechnical improvements . The methods of economic calculation used were those of ‘ valuation parameters applied to the livestock so by referring to the ” ordinary farmer ” .

In the economic calculation , to determine the average cost of treatment is considered a lactation of 28 days and a dose of NAT ® 1 kg / t . He then proceeded to ‘ analysis of the economic benefit of quantifying the monetary benefit resulting from the improvement in livestock and more precisely: 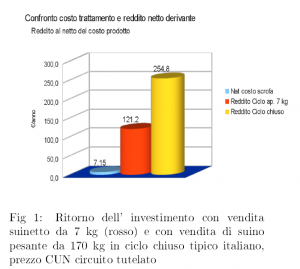 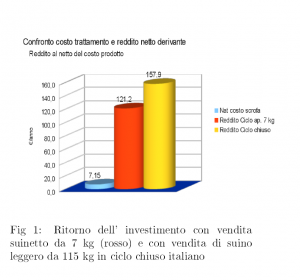 From ‘analysis of the data it is evident the significant return of’ investment ( ROI ) in so much with open loop that with and in closed loop where, however, brings the best results. This is obviously due to the fact that improving the fertility of the sow, on equal terms I definitely a greater production of live weight.